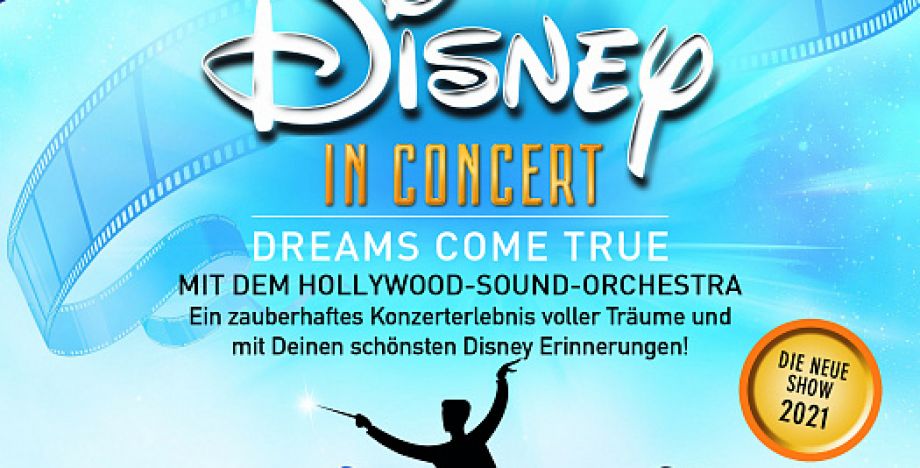 From 2021, the new show "Dreams Come True" from the successful "Disney in Concert" series will be seen and, above all, heard in Switzerland.

Star soloists will perform the most beautiful Disney songs live on the big stage together with the Hollywood Sound Orchestra and thrill the audience. Over the past four years, more than 250,000 visitors have already immersed themselves in the musical worlds of Disney.

When little dreams learned to fly, when everything seemed possible and when the greatest magic was hidden in the smallest moments, it was always there - one of the wonderful melodies from our favourite Disney films. These unique soundtracks of real musical masterpieces, where dreams can come true if you only believe in them hard enough and follow your heart. The fantastic stories accompany us throughout our lives, because as soon as "our personal Disney song" sounds, the most beautiful memories are awakened.

From the magic of small moments to the breathtaking force of big emotions, accompanied by fascinating special effects and an overwhelming multimedia presentation of the film scenes, this creates a few unforgettable hours evening after evening, during which the audience can fly away and dream.

The concept: to combine the most famous film scenes with live performances of the best Disney songs from over 80 years of film history! This creates thrilling evenings where every guest can indulge in their own memories and at the same time experience that indescribable goosebump feeling with family, friends and many like-minded people. The star soloists accompanied by the outstanding Hollywood Sound Orchestra take the audience on a colourful journey full of dreams deep under the sea, in the middle of the jungle or onto the vast ocean.